SARANAC LAKE — There's no doubt that the celebrations lasted well into the evening on Sunday.

The North Country Community College women's basketball team repeated as the NJCAA Region III champions, and wow did the Saints ever have to earn the title.

As the top-seed for the first time in school history, North Country's women hosted the Region III final four at the Sparks Athletic Complex over the weekend, and on their home court, they survived two tension-filled battles to earn a second-straight trip to the NJCAA Division III women's national tournament.

The Saints first got past Mohawk Valley 66-63 in Saturday's semifinal game, and then took down Onondaga 76-67 in Sunday's final in a game where they trailed for much of the afternoon. The turning point came when North Country erased a 56-51 deficit by going on a 10-0 run in a span of 1:23 early in the fourth quarter.

North Country went 8-for-10 at the foul line during the final 1:11 of the game to secure the victory in the championship matchup that pitted two teams ranked in the top-10 nationally against each other. NCCC and Onondaga both entered the game with 27-3 records, and after successfully defending their Region III crown, the Saints are now heading to the Chicago suburb of Rockford, Illinois with a national title in their sights.

The NJCAA Division III championships take place March 12-14 and features the eight teams still remaining in the hunt following regional finals played across the nation this past weekend. After winning their first Region III title in school history a year ago, the Saints went on to finish third in the national championship tournament. With a mix of impact freshmen and experienced sophomores who have lifted North Country to a 28-3 record, they're hoping to take home a bigger prize this time around.

"Last year we were very happy to be there — not that we didn't try to win, but I think this year, there's going to be a lot more oomph going into it," Saints coach Jerrad Dumont said. "We have kids who have been there before, we're probably heading into cold weather in Chicago, so we're used to that."

What made Sunday's game particularly challenging for the Saints was foul trouble that came on early. North Country point guard Talesa Campbell was whistled for her third foul less than three minutes into the second quarter, and the sophomore had four entering the second half. Saints starters Damoni Wells and Lavender Ward also played much of the second half with four fouls but still made huge impacts down the stretch.

With Campbell watching from the bench, Onondaga started to make a run in the second quarter and surged out to a 25-17 lead. But freshman Lauren Denny saved the day, at least for a bit, by keeping the Saints close. After her team faced its biggest deficit of the game, eight points, Denny came up big on the boards and also knocked down nine points in the period, starting with a pair of back-to-back field goals from inside the paint. She added a pair of free throws later in the quarter and then drained a three-pointer 40 seconds before halftime.

The teams headed into intermission in a 30-30 deadlock. 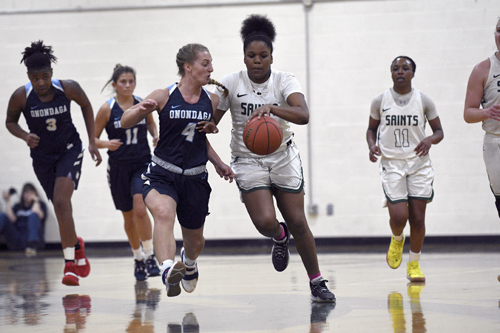 North Country's Dontasia Simpson dribbles up court while trying to shake off Onondaga's Holly Sleeth during the second half of Sunday's game at the Sparks Athletic Complex. (Enterprise photo — Lou Reuter)

Denny finished as the game's leading scorer with 21 points and was named the tournament's most valuable player.

"I think I started off slow and that kind of fueled me," Denny said. "I knew I had to step it up when she (Campbell) came out of the game. I knew we needed a boost. When one person scores for us that's usually when everyone else picks it up and we score, score, score. That's how we go on runs."

The third quarter was a back-and-forth battle that saw the score tied five times and each team taking a slim lead on several occasions. The Lazers carried a 52-49 advantage into the final 10-minute quarter and eventually moved ahead 56-51 with 7:50 remaining. That's when the Saints began their decisive rally that beginning with their 10-0 run. North Country took the lead for good when Carder put back and offensive rebound and sank a foul shot on a three-point play that moved the score to 59-56 with 5:14 left on the clock. Wells then converted a steal into a layup 25 seconds later to up the Saints' lead to 61-56.

Onondaga never got closer than five points the rest of the way and had to settle for being Region III's runner-up after being the tournament's No. 1 seed a season ago before bowing out in the semifinal round.

Tynasia Williams and Katelyn Karleski were the top scorers for the Lazers with 14 points each and Amber Meigs added 13 points. Markia Peak and Holly Sleeth also tossed in eight points apiece in the loss.

The Saints outscored the Lazers 27-15 in the fourth quarter, with 19 of the host team's points coming from the foul line.

"Onondaga came in fired up and ready to go. Their kids were tough, they were ready to play, they got up and defended," Dumont said. "I thought they were the aggressors to start. In the second quarter, when we were down by five our six and had a couple kids in foul trouble, I thought Lauren Denny really kept us going. She was really the only one getting to the rim in the first half.

In the third quarter and fourth, I thought we kind of changed the way we played," continued Dumont. "I don't think we were playing as scared. We were more of the aggressor, and once that happened, that's when we jumped out to the lead."

Onondaga head coach Mike Wheeler said with the exception of the closing minutes of the game, things were really looking up for the Lazers.

"We controlled the game and we were playing great," said Wheeler, whose team carried a 17-game winning streak into the final. "We had a stretch in the last six minutes where we turned the ball over a couple times and I think that's what really caused the loss. We just didn't play well down the stretch, but I couldn't be happier with the kids. They fought hard. Just to get here was great. That was a great basketball team that we played."

"I'd say our defense, playing together and our energy got us through the weekend," said Wells, a sophomore and first-year player with the Saints. "This is something that a lot of us have never done before and it feels awesome."

The athletic guard from Washington, D.C. said if the team can keep doing what it has for most of the season, a national title is in reach.

"Keep playing together, play hard, be intense and play defense," she said. "Just play basketball. That's what we do."

"It feels great, it's really exciting, especially being here," Dumont said. "The girls have put a lot into this. We've been practicing since September 1 really. Running and lifting and doing everything. They deserve this. They've played hard all year, every single day for us."

The seedings and schedule for the NJCAA Division III women's national championships had not been released as of press time Sunday night. The tournament, which takes place at Rock Valley College, kicks off with four quarterfinal matchups on March 12. 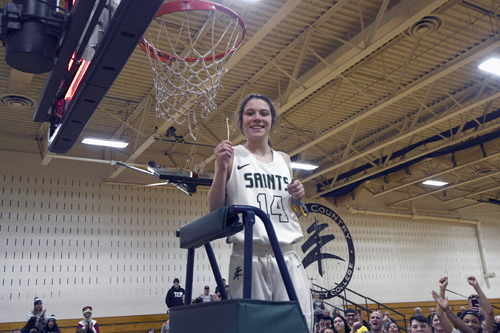 All Photos and Story Courtesy of Lou Reuter and the Adk Daily Enterprise. Lou is the best around!